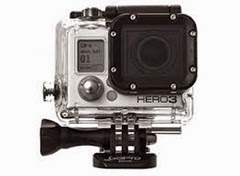 You have probably seen pictures and videos taken with a GoPro Camera all over the internet recently, but how much do you know about GoPro? Well, GoPro is an American corporation that makes the world's most versatile cameras. They develop, produce and market high-definition cameras for personal use. Usually used to photograph and video extreme action sports such as surfing, skateboarding, snowboarding, mountain climbing, and any other activity that is difficult to photograph, GoPro Cameras capture still photos as well as HD videos using a wide-angle lens.

Nicholas Woodman, founder and CEO of GoPro, Inc., decided to create an innovative camera to capture adventures after a surfing trip he took in Australia in  2002. After not being able to take shots of his surfing, he sought to construct a camera that could take professional quality photographs at an affordable price (that is where the name GoPro derived from). Initially raising money to start his company, Woodman sold bead and shell belts out of his VW van for less than $20 each. This inspired the fashionable straps that attach to the cameras.

Featuring numerous style cameras at varying prices, GoPro offers something for everyone. You can purchase your GoPro Camera at OnlineWakeboards.com or visit our Ships’ Store located at Lighthouse Harbor Marina on Lake Wallenpaupack, PA.