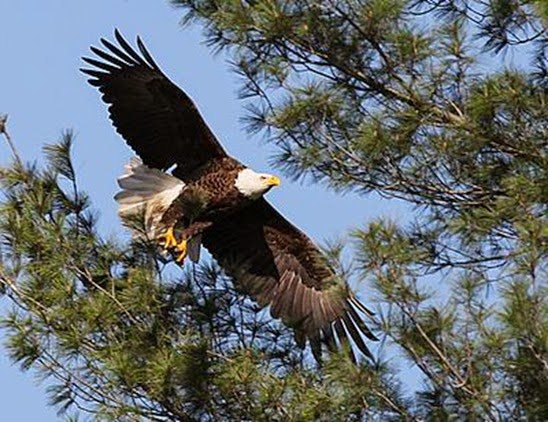 For the past few years, PPL has closed Lake Wallenpaupack's Kipp Island to the public until the end of July in an effort to protect a bald eagle nesting area. The bald eagles have been returning to Kipp Island, which is located across from Lighthouse Harbor Marina, year after year to raise their eaglets and PPL tries to support secure and healthy habitats for these endangered birds of prey.

Bald eagles mate for life and a pair will often return to the same nesting spot every year to raise their young, working together to defend their territory from predators. Usually built in a tree, the nest is about five feet in diameter and built near water. The pair will rebuild nearby, or in the same spot, if something happens to their nest. If they feel threatened, they will likely build a new nest nearby in their nesting area which is around two square miles.

At around four or five years of age, an eagle will reach sexual maturity. However, they do not breed every year. Possibly due to weather, lack of a nesting area, or perhaps it is an instinctive decision, a pair may choose not to breed. Yet, they do have many years to breed since they can live up to 30 years in the wild.

Eggs are speckled off white or beige in color and are comparable in size to a baseball. The female will lay the first of two or three eggs about five to ten days after a successful copulation. A few days later, she will lay the second, and possibly a third after that.

The female spends most of her time caring for the eggs but the duty is shared between both eagles and lasts approximately 35 days. Once ready to hatch, the eaglets emerge in the order they were laid and spend generally 11 to 13 weeks in the nest before venturing on their own.

The lake community is proud to have the bald eagles nesting in the area and look forward to them returning each year. Kipp Island reopened to the public on August 1st.

Posted by Lighthouse Harbor Virtual Marina at 11:02 AM